The books of Kings conclude the history of Israel from its origins in the clan of Abraham, as recorded in Genesis, to the fall of Jerusalem that ended Hebrew national independence.

The two books are in the section of the Hebrew Bible designated the “Former Prophets” (Joshua, Judges, Samuel, and Kings), which is comprised of Israelite annals presenting a theological interpretation of Hebrew history emphasizing covenant relationship with YHWH and the attendant national blessings and curses conditioned by obedience to his covenant stipulations.

The two books of Kings document the covenant history of Israel from King David’s death and Solomon’s succession to the throne through the demise of the divided kingdoms of Israel and Judah.

The separation of Kings from Samuel is somewhat artificial. Early Greek manuscripts of the Old Testament classify Samuel and Kings as Basileiai (“reigns, kingdoms”) in four volumes: Samuel = First and Second Books of “Kingdoms,” Kings = Third and Fourth Books of “Kingdoms.”

The books of Kings continue the story of kingship begun in Samuel, and their primary purpose is to record the "covenant failure" of the Hebrew united and divided monarchies. The Biblical narrative implicitly balances the notion of God's sovereignty and the reality of human freedom and declares that God was justified in exiling His people for the failure of the kings of Israel and Judah to uphold the ideals of the Davidic covenant.

The Writing of the Book

Like most of the Old Testament historical books, the authors of the Kings annals remain unknown. The Jewish tradition preserved in the Babylonian Talmud attributes the books of the Kings to Jeremiah the Prophet. This association may have been based on the similiarties between Jeremiah 52 and 2 Kings 24-25.

It has been noted that the history recorded in Kings gives a prominent place to the lives of the Old Testament prophets and the accuracy of the prophetic word in relationship to the Israelite and Judean monarchies. However, there is little concrete evidence for identifying the writer on the basis of context, theological theme, and purpose of writing.

Two distinct theories of authorship and unity of the Kings history prevail among Biblical scholars.

Biblical scholars have proposed that there are some other sources for Kings, though none are cited in the text:

Although hypothetical, these proposed contributions do fit the context of the Kings history, and they have gained widespread acceptance among Biblical scholars as probable sources underlying the composition of Kings.

Given the available evidence, we do best to assign the books of Kings to an anonymous compiler-author of the sixth century BC. Whether he was a prophet or not is uncertain, but he understood the covenantal nature of Israel’s relationship to Yahweh and its implications for Hebrew history.

The book was probably composed in Palestine sometime between the fall of Jerusalem (587/586 BC) and the decree of King Cyrus of Persia that permitted the Hebrews to return to their homeland (539 BC).

A date of 550 BC appears reasonable for the completed Kings record. 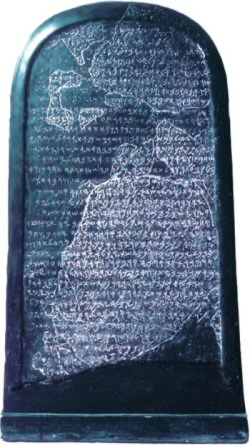 The military exploits of the Moabite kings are recorded on the Mesha Stele (840-820 BC) and include his interactions with Israel.

The books of Kings represent a selective history of Israel from the closing days of King David’s reign until the Babylonian conquest of Jerusalem. By way of chronology, 1 & 2 Kings documents the political history of Israel during the united monarchy, beginning about 970 BC, through the Assyrian exile of the northern kingdom of Israel (722 BC) and the Babylonian exile of the southern kingdom of Judah (587/586 BC).

Two historical footnotes are attached to the end of 2 Kings. The first (25:22–26) recounts King Nebuchadrezzar’s appointment of Gedaliah as governor of Judah and Gedaliah’s assassination by a group of Jewish conspirators led by one Ishmael sometime between 586 and 582 BC. The second (25:27–30) records the release of King Jehoiachin from prison in Babylon after the death of King Nebuchadrezzar (March 562 or 561 BC).

The Kings history surveys the Israelite “golden age” of united empire under King Solomon, the split of the monarchy during the reign of Rehoboam, and the ebb and flow of the political and religious fortunes of the divided kingdoms of Israel and Judah until their collapse. Israelite interaction with the surrounding foreign powers is also integrated into the Kings account.

Archaeology has made significant contributions to the illumination and substantiation of the biblical record in 1–2 Kings. Specific discoveries include the unearthing of sites associated with the periods of both the united and the divided Hebrew monarchies (e.g., Megiddo, Hazor, Gezer, Samaria, Beersheba, Arad, Lachish, and Dan).

Extrabiblical inscriptional evidence from Assyria, Babylonia, and Syro-Palestine has greatly supplemented our understanding of the classical Hebrew language, both Hebrew and ancient Near Eastern chronology, and Hebrew political history, religious experience, social customs, and daily life. All this is disclosed in the context of ancient Near Eastern culture—e.g., the Moabite or Mesha Stone, the Black Obelisk of Shalmaneser III, the Sennacherib Prism, the Assyrian Annals, the Babylonian Chronicle, and the Lachish letters. 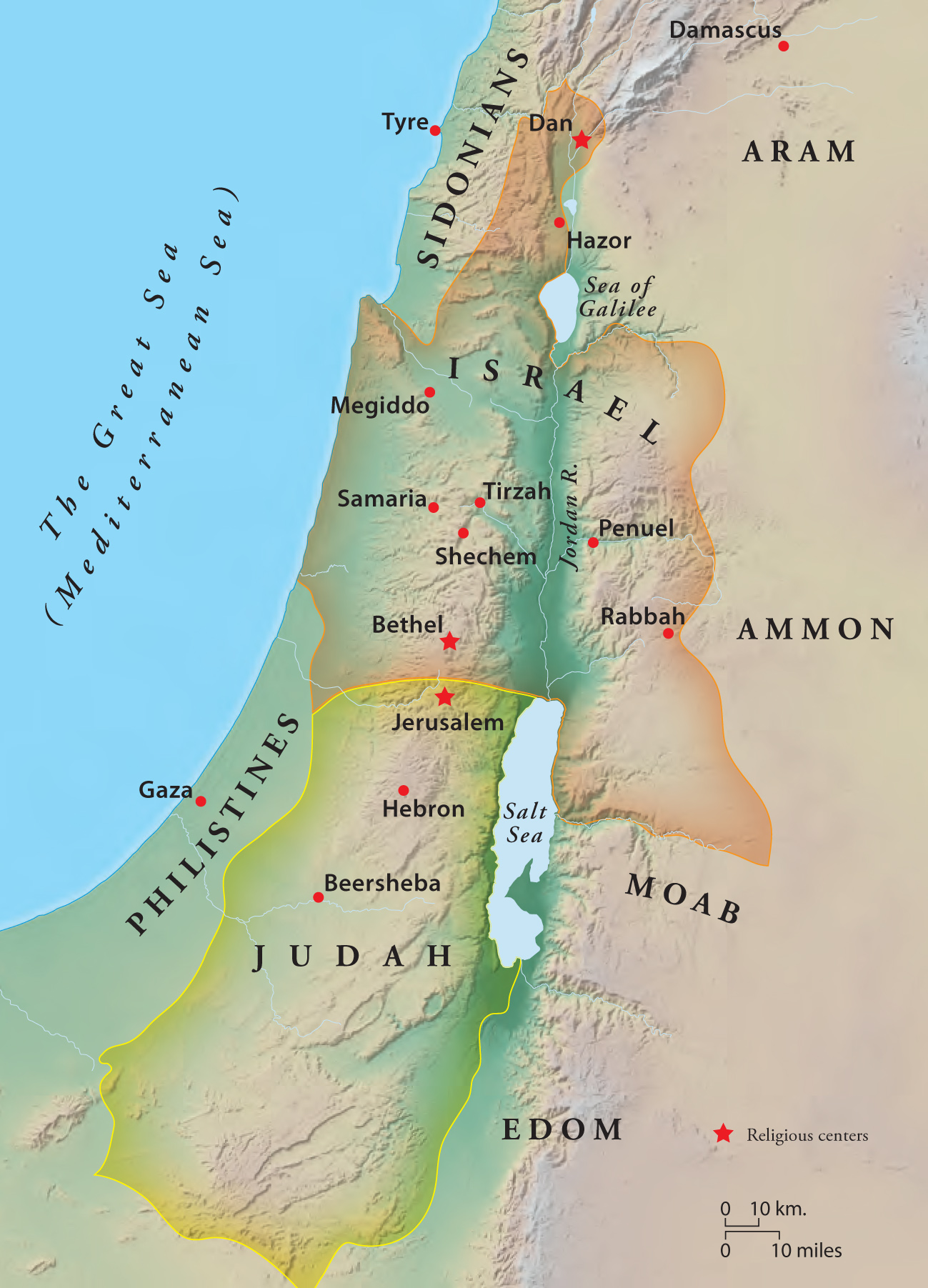 The books of Kings relate the history of the Hebrew united and divided monarchies in their “covenant failure.” The narrative focuses on the figures primarily responsible for covenant keeping in Israel—the kings and the prophets. The prophetic voice has a prominent place in the story of kingship because those divinely appointed messengers functioned as the conscience of the monarchies.

The history of the Hebrew nation is told through the lives of the Israelite and Judean kings as representatives of the nation, because the fortunes of the king and the plight of the people were entwined. Rebellion and disobedience in the form of idolatry and social injustice on the part of the king brought divine retribution on the nation in several forms, including oppression by surrounding hostile powers, overthrow of the royal dynasties, and ultimately exile into foreign lands.

Conversely, the blessing of Yahweh’s favor in the form of peace, security, prosperity, and deliverance from foes rested upon the people of God when the king was obedient to the law of Moses (or instituted religious and social reforms after repentance and revival).

The accounts of the rival Hebrew monarchies in Kings also convey the story of alternative modes of kingship competing in Israel and Judah. Indeed, part of the purpose of the Kings history is the legitimization of the Davidic dynasty through the agency of the prophetic office. This was because the kingship covenant previously announced by Nathan sanctioned the tribe of Judah and the family of David as rightful heirs to the Hebrew throne (cf. 2 Sam. 7:1–17).

The most obvious purpose of the Kings narrative is to complete the written history of Hebrew kingship as a sequel to the books of Samuel. The record of Hebrew monarchies implicitly balances the notion of God’s sovereign hand in Israel’s covenant history and the reality of human freedom and accountability for those joined to him in covenant relationship.

This prophetic view of Israelite history served both to admonish the king and people for past breaches in covenant keeping and to warn them of the grave consequences attached to continued disobedience to Yahweh’s covenant stipulations.

By the same token, 1–2 Kings contained a word of exhortation and offered a word of hope to Israel and Judah. God still ruled human history and remained faithful to his agreement with the Hebrews as his “elect” (cf. Ps. 115:5–6). The repeated references to fulfilled prophecy and the two historical appendices especially called to mind the Davidic covenant and God’s promise to establish kingship forever in Israel (2 Sam. 7:1–17).